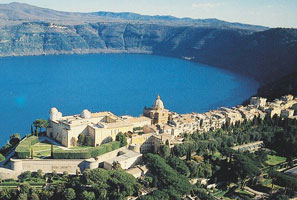 The territory of Castel Gandolfo extends in the north-northeast direction between the Colli Albani hills and the Agro Romano plain.

It is included among the fifteen villages that form the protected area of ​​the Regional Park of Castelli Romani.

In addition to boasting a source that was lost in the mists of time and latin history (Alba Longa, a city founded by Ascanius son of Aeneas, apparently arose in the vicinity of the site of Castel Gandolfo), the surrounding area is home to several buildings of historical significance, traces of the presence of the secular papacy.

Among the many palaces built by the will of some popes, remember the Papal Palace, some of the Pontifical Villas extraterritorial property and possession of the State of Vatican City, divided into three parts historically distinct: Papal Gardens or the Moro; Villa Cybo; Villa Barberini; Palazzo Cybo Villa Santa Caterina, Villa Torlonia, Villa Chigi, built in the crater of the drained pond at Round Pavona, where now stands our prestigious golf course.

Located a few kilometers from Rome and easily accessible. The area includes the Lake Albano (also called improperly lake of Castel Gandolfo and where you can admire the nearby Amphitheatre, the Castrum, the monument to the Orazi and Curiazi and the cisterns) and lake Nemi.

Among the most important sites of archaeological importance we also include the whole of the ancient city of Tusculum, with the well-preserved theatre dating back to the first century b.C., the remains of the Forum, the Villa of Tiberius and several tombs. It is also possible to visit the Villa of Vitellius in Ariccia, the nymphs of Lake Albano, the temple of Juno Sospita at Lanuvio, the remains of the Temple of Diana at Nemi.